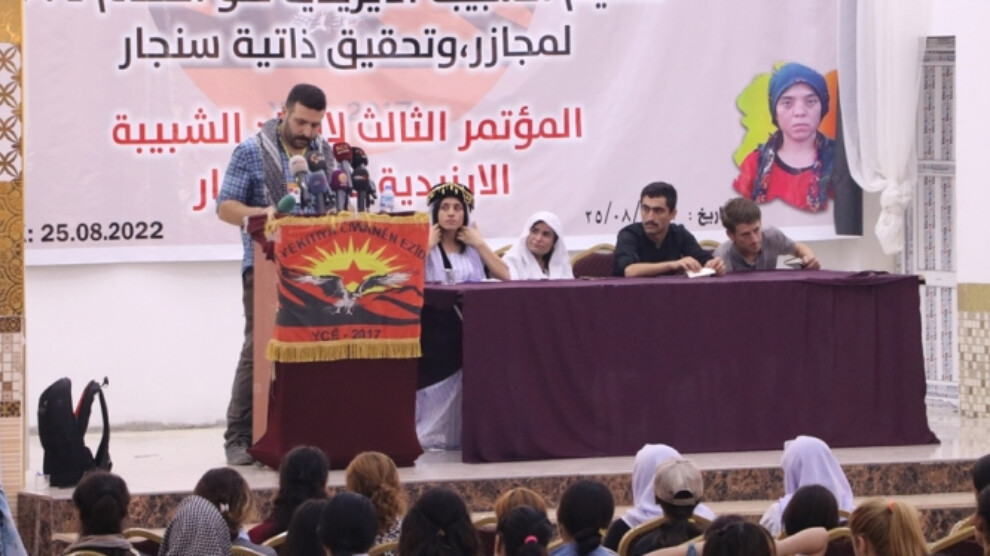 300 delegates, 200 guests from Shengal and outside and Arab and Shia youth are taking part in the 3rd Yazidi Youth Congress held today in the city of Sinun under the slogan “Organizing Youth Yezidi will avenge the 74th massacre and ensure the autonomy of Shengal”.

Institutions and organizations of the Yazidi people and participants deliver speeches at the congress which began with a minute of silence in memory of the martyrs and will last all day.

In the opening speech, Yazidi youth spokesperson Sara Botan said: “We, the Yazidi Youth Union, are holding this congress in August to show the enemy that he cannot destroy us with his attacks. We are convinced that other potential massacres will be thwarted by the youth organization. We celebrate our congress in praise of all our defense forces and guerrillas who are currently fighting the Turkish troops in the free mountains.

“YAZIDI YOUNG PEOPLE HAVE THE WILL”

Speaking on behalf of YBŞ (shengal resistance units) and YJŞ (shengal women’s units), Dilşêr Qîrani said: “We are celebrating the Yazidi Youth Congress. We respectfully commemorate those who were martyred in August. The enemy who wants to destroy the Yazidis is now trying to alienate young people from the Yazidi faith. Young people will respond to these plans first. Yazidi youth have willpower. This has been proven throughout history. The enemy wants to evacuate Shengal in defiance of the will of the Yazidi youth who are reclaiming Shengal. As YBJ and YJŞ, we stand with our youth to ensure the autonomy of Shengal and realize the dreams of our martyrs.

“OUR YOUTH MUST PROTECT THEIR LAND”

“We congratulate the congress for all our people. Our youth should embrace their land and return. They should join the resistance in Shengal. Our young people should join the defense forces and work together for an autonomous Shengal,” said Şemê Remo on behalf of TAJÊ.

Speaking on behalf of the Patriotic Youth of Kurdistan, Herdi noted that the Turkish state is attacking Kurdish people everywhere. “By attacking the guerrilla forces, Turkey wants to destroy the Yazidi people and the other components that claim their rights. Yet this plan was thwarted through hard work, resistance and the spirit of guerrilla warfare.

Cewad Êzidi, who is attending the congress on behalf of the European Yazidi Youth Union, celebrated the congress for August heroes Mam Zeki, Mam Beşir, Zerdeşt Şengali and Dijwar Feqir. Addressing the activities and organization of Yazidi youth, Êzidi said that further massacres could be avoided through organization, and that there is a need to organize Yazidi youth all over the world.

After speeches and messages, the perspectives of Kurdish leader Abdullah Öcalan were discussed.

The congress will continue with the presentation of a two-year work report, review of the political situation, cinema-vision projection, election of the Assembly of the Union of Young Yazidis.