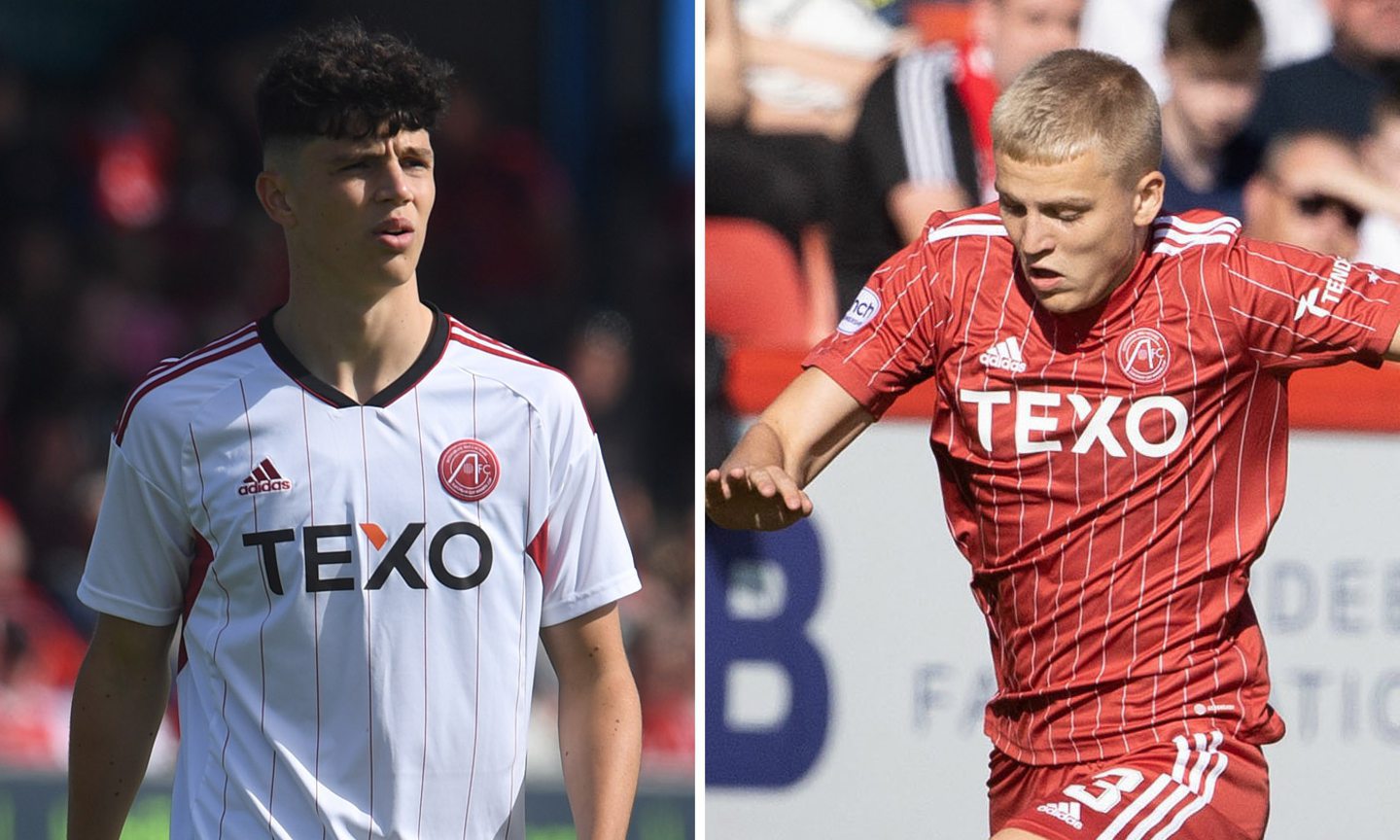 Aberdeen academy manager Gavin Levey believes youngsters Ryan Duncan and Jack Milne can thrive in the Dons’ first team – due to the difficulties they had to overcome during their earlier development.

Winger Duncan, 18, has made six appearances under Jim Goodwin this season – scoring his first senior goal in the 5-0 Premiership rout of Livingston on August 27.

Milne, 19, a regular in the squad, could get the chance to show what he can do in the top flight imminently, with fellow centre-half Liam Scales now suspended for the weekend encounter with Kilmarnock next.

Despite their young age, Duncan and Milne are physically imposing and clearly talented footballers, but Levey is convinced that the difficult times they have endured over the years are as essential to their first-team rise as the ups.

He explained: “These guys, I have full confidence in them and I hope that the experiences they have had through the academy will give them the chance to start.

“I have no doubt in my mind that these two players can go and make an impact in the first team.

“It’s great when the youngsters in the academy can see there’s a visible path and see players like Ryan scoring goals for the first team because it gives them that extra incentive to keep going and be somebody. one like Ryan or Jack Milne, who has his chance now I hope.

“Jack signed his professional contract the second year. He was not offered one the first year.

“Jack had a few injuries to overcome, because around under 15 or 16 he went through a massive growth spurt and had to get used to his body again.

“Ryan, when he was very young, had to develop more resilience and confidence and have that self-belief.”

It’s common to hear a story of early development about a player who may not have been the undisputed star of his age group, or suffered setbacks in his early teens before becoming the one who succeeds. at first-team level.

Now a 23-cap Scotland international and established English Premier League player, Cove-raised Fraser broke into Aberdeen’s first team from the academy to become a regular in 2012, showing in his case how the abilities of a player can explode if he spends years trying. to match fancier peers in the youth team.

Levey said: “They all have their ups and downs.

“Look at Ryan Fraser – sometimes these guys aren’t at the top of their age group. They are the ones who arrive behind and push.

“They can see what the best players are getting (in terms of performance and praise) and they keep pushing themselves more.

“Sometimes it’s the ones who have had a few setbacks (coming to the first team) – like the ones here.”

Levey has revealed Ryan Duncan’s family are die-hard Dons fans who would have been delighted to see their son play at Pittodrie last month.

He admits their passion may add a few extra ounces of pressure on the now first-team player’s shoulders, but he said: “Ryan’s family, Marie and Andy – his mum and dad, are die-hard fans of Dons – his father in particular.

“Watching Ryan play for the Dons under 10 was a huge deal for Andy.

“I spoke to him the day Ryan made his debut (against Rangers in 2020/21) but I can’t imagine what it was like to see Ryan score for Aberdeen and what the family would be like.

“They are on a farm in Keig (Aberdeenshire), and it will have been special for them.”

Levey believes fellow defender Evan Towler – currently on loan at Cove Rangers – could be the next academy star to break into the Aberdeen first team, with the 17-year-old having shown, like Duncan and Milne , the same ability to adapt when you find yourself outside your comfort zone.

Towler made the U16 Scottish Cup final as a 13-year-old for Elgin City in League Two last season and is now a Championship player before he was of drinking age.

However, despite crossing the first-team threshold, the Reds academy boss knows there could still be more ‘bumps’ to come for Duncan, who has been on loan at Peterhead all season. last.

And the same goes for Milne, who was a midfielder while on loan at Highland League Brechin City before being called up and undergoing a job change.

Dean Campbell, who has made 75 first-team appearances, shows the path between making a first-team impact and being an Aberdeen regular can seem straight – but there can be hidden twists.

Of the midfielder currently on loan at England, Levey said: “They still have to be prepared for some little bumps along the way.

“I look at Deano, Dean Campbell – there was a big flag of Dean’s face in the Red Shed at one point.

“Now he is over there at Stevenage, which is in the top four in League Two.

“He has to try a different route to get where he wants to be.”

It doesn’t matter where they end up – whether as Aberdeen first-team regulars, like Connor Barron, or stepping down a level, or being catapulted into the footballing stratosphere – Levey and his team want youngsters going through Aberdeen academy to be “as good as they can be”.

Right-back Calvin Ramsay, who moved to Premier League side Liverpool in a deal worth up to £8million over the summer, and Scotland international centre-back Scott McKenna , who has helped Nottingham Forest return to the English top flight since his arrival. 2020, represent the latter category – and Levey’s connection to them lives on.

He said: “It’s nice to be able to have a relationship with these players that you’ve been seeing for a long time.

“Scott is fine, even the number of games he plays – it’s scary.

“It’s so important that we have these role models who are humble and have these values ​​instilled by their family and academic experience. They think they haven’t made it and they’re always striving to be better. .

“Calvin is back in training on the road, and a lot of people are excited to see him take his chance, when it happens.

“You don’t sign a five-year contract at Liverpool to be rushed. They clearly see a lot of room for development in him with the huge potential he has.

Back on the pitch, we’re getting closer 😁 pic.twitter.com/2bRxUL1ZsS