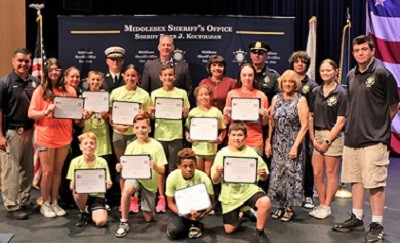 UPDATE September 5: The Middlesex Sheriff’s Office Youth Public Safety Academy returned this summer for a 21st year, after a two-year absence due to the Covid-19 pandemic.

Over four weeks in July and August, nearly 270 children from 33 communities in Middlesex County participated in the camp. In addition to 241 cadets aged 8 to 12, the staff also welcomed 27 instructors in training. These 13 to 16 year olds participate in the camp’s Future Leaders program.

The academy has been “a staple of Middlesex County summer for two decades,” Sheriff Peter J. Koutoujian said in a news release. “He improved safety and built lasting relationships by bringing together children and public safety professionals to talk about team building, fire safety, emergency preparedness and other critical lessons. in a fun environment.

“And many of those young people who have participated over the years have continued the lesson they learned by returning as counselors or pursuing careers in public safety, education, health care or the military. .”

This summer, in addition to lessons on fire safety, cyber security and emergency preparedness, cadets visited the Boys and Girls Club of Greater Billerica to work on team building skills and toured the local police and fire stations. New this year, the academy has added a gardening component, with cadets able to plant their own seeds or seedlings to take home.

Arlington children ages 8 to 12 were among the graduates of the first session of the Youth Public Safety Academy in July. Koutoujian congratulated 64 graduates on July 15. Other cadets came from Bedford, Burlington, Cambridge, Tewksbury and Tyngsborough.

The academy, established by the Middlesex Sheriff’s Office in 1999, focuses on issues such as internet safety, fire preparedness and prevention, and water safety skills.

Three additional week-long sessions with participants from across Middlesex County ran through August 5 this year.

To learn more about the academy and other community programs, visit middlesexsheriff.org/community

This ad was posted on Thursday, July 21, 2022 and updated on September 5. Kevin Maccioli of Koutoujian Sheriff’s Office provided the information.