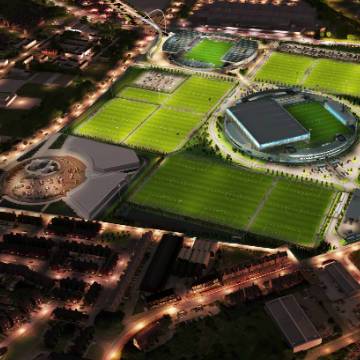 With the construction of an 80-acre facility at the heart of the ETIHAD campus dedicated to training academy players, Manchester City has focused on building for the future rather than the present.

The rewards are being reaped, as the U23s and U18s both won their respective professional development leagues in 2020-21, and the latest player to make the move to the first team – Cole Palmer – recently put on a stellar display in City’s 4-1 FA Cup win over Swindon.

But does it make our squad the best currently active players who have come through the Blues’ academy?

To be considered for this squad, they must have played for City’s senior team at least once in a competitive match, which means players like Jadon Sancho and Adrien Rabiot cannot feature.

It’s easy to forget Kasper Schmeichel was on City’s books, but the Danish keeper joined their youth team in 2002, the same year his father – Peter – signed for the Blues.

Kasper made seven appearances in the 2007-08 season, keeping a clean sheet in the Manchester derby and saving a Robin van Persie penalty against Arsenal, although when Joe Hart became the club’s first choice in 2008 Schmeichel was asked to leave.

He got his wish the following year when he left for Notts County, and he has since established himself as one of the Premier League’s top goalkeepers at Leicester, also winning the league in 2016 and the FA Cup in 2021. earning 78 caps for Denmark so far.

Her career and life story was recently featured on ITV against all odds series.

Pablo Maffeo has been capped by Spain at U16, U17 and U21 levels, although he has yet to feature for the senior team.

He only played three times for City after joining their academy in 2013, with all those games coming in the 2016-17 season, and he had three loan spells at Girona before leaving permanently for Stuttgart in 2018.

Currently on loan at Mallorca from Stuttgart, Maffeo has been described by Lionel Messi in 2020 as the toughest defender he has ever faced, and you can’t get much higher praise than that.

Eric Garcia started his career at La Masia’s youth academy in Barcelona, ​​but moved to Man City in 2017 and played for the club’s U19s in the UEFA Youth League.

His senior debut came in December 2018 against Leicester in the League Cup, and when the Premier League returned from lockdown in June 2020 he was City’s first-choice centre-back alongside Aymeric Laporte.

However, despite Pep Guardiola rating him well, Garcia rejected a contract extension and returned to Barcelona last summer.

The Spain international’s return to 14 caps hasn’t started well as he received two red cards in his first six games for the club, including a 3-0 Champions League humiliation by Benfica , and he was recently ruled out for a month with a hamstring injury.

The current Burnley captain, Ben Mee’s only appearance for Manchester City was a 2-1 loss to West Brom in the League Cup in September 2010.

He joined the Clarets permanently in 2012 after half a season on loan at Turf Moor, where he became part of a formidable defensive trident alongside centre-back partner James Tarkowski and goalkeeper Nick Pope.

He has made 368 appearances for the club in just over a decade, although his contract with the relegation-threatened side expires this summer.

Tosin Adarabioyo joined Manchester City’s youth ranks in 2003 aged five, and he made his debut in a 5-1 loss to Chelsea in the FA Cup in 2016, being praised for his performance against the club. striker Diego Costa despite the score.

However, he would only play seven more times for the club, and after two loan spells at West Brom and Blackburn he signed for Fulham in 2020.

He has become one of the Cottagers’ first-choice defenders, playing 20 games this season and scoring twice, including in their recent 7-0 draw against Reading.

Adventurous left-back and marauder Angelino joined City from Deportivo La Coruña in 2013, despite being loaned out three times – as many games as he played for the club during his first spell there – before moving to PSV five years later.

He really came into his own at the Philips Stadion, making the Eredivisie Team of the Season after providing ten assists in 2018-19, and City exercised their buyout clause that summer.

Once again he quickly found himself out of favor but on joining RB Leipzig in January 2020 the Spaniard once again showed his class, scoring eight times and providing 11 assists in all competitions this season last.

Perhaps the crown jewel of this team, Phil Foden has become an ETIHAD fan favorite with his skill on the ball and his ability to glide past the players with ease.

Described by Guardiola as the player with the most potential he had ever seen when he broke into the senior team in 2017, Foden had to bide his time as a rotation option for a while, but after won the man of the match award in the 2019-20 League Cup Final, he hasn’t looked back.

He played a central role in City’s title win and qualification for the Champions League final last season, scoring 16 goals and providing ten assists, and he will play an even more crucial role for the club in the years to come.

Capable of playing in midfield or in attack, Cole Palmer has scored three goals in 13 games for the senior side so far, including one in the Champions League against Club Brugge and a powerful strike against Swindon last week .

He made headlines in October by making two appearances in a matter of hours, coming on as a late substitute in the Blues’ 2-0 win over Burnley before scoring a hat-trick against Leicester U23s for Man City U23s in Premier League 2 later. That day.

Still just 19, Palmer will have to bide his time to become a City first-team regular, much like Foden did, but it might well be worth the wait.

As with Jadon Sancho, Man City recognized Brahim Diaz’s talents early on but were unable to guarantee him regular playing minutes.

He made just 15 appearances for the club – including only four starts – before expressing his desire to leave in search of more first-team action, and he joined Real Madrid in January 2019 for 17million euros.

Breaking through at the Bernabeu would prove just as tricky, but the diminutive attacking midfielder has been a regular at AC Milan since being loaned out there in the summer of 2020, even scoring against Liverpool in the Champions League earlier this season.

Currently under contract with VfL Wolfsburg, Lucas Nmecha spent ten years in City’s academy, scoring prolifically for the reserves before making his senior debut in 2017.

However, he will make just three appearances – all as a substitute – in four years, and after catching the eye on loan at Anderlecht last season with 21 goals in all competitions, Wolfsburg bought him for £8million. euros.

He has since scored eight goals in 21 games for Wolves, and he received his first caps for the German national team in November 2021.

Nigeria striker Kelechi Iheanacho has blown hot and cold since joining Leicester in 2017 for £25m, despite scoring 11 goals in his last 12 league games last season.

Iheanacho’s first goal for City only came in his second game for them with a late winner against Crystal Palace in September 2015, just minutes after being substituted.

The club had high hopes for him after averaging a goal every 94 minutes in the 2015-16 campaign, although the arrival of Gabriel Jesus in January 2017 left Iheanacho surplus to requirements, and he has joined Leicester that summer.

He also scored the winner for Nigeria in their recent 1-0 win over Egypt in the Africa Cup of Nations in Cameroon, one of 12 goals he scored for the Super Eagles.