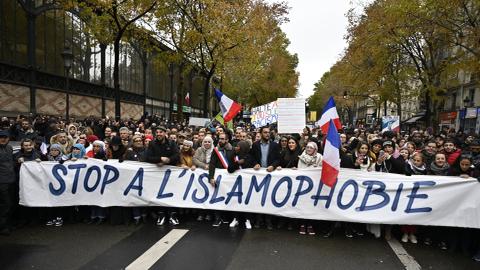 The Paris campaign to silence outspoken Muslim communities targets outside the country.

The young French Minister of Citizenship Marlene Schiappa described on Twitter the network of Muslim students as an “Islamist association”.

FEMYSO, a network of 33 Muslim youth and student organizations in 20 European countries, has in the past criticized the French state for Islamophobic policies targeting the country’s Muslim population.

The French government often labels its critics as extremists, Islamists, or Islamist leftists if they challenge state policies that seek to regulate the way French Muslims practice Islam.

According to the European Commissioner for Equality, the meeting with FEMYSO aimed to discuss â€œthe situation of young Muslims in Europe and the challenges encountered due to stereotypes, discrimination and outright hatredâ€.

French Secretary of State for Europe ClÃ©ment Beaune called the EU’s meeting with FEMYSO “absurd”, promising that the French government would approach the commission to ensure that links with the student movement base are cut.

I had a discussion with @FEMYSO on the situation of young Muslims in Europe and the challenges faced due to stereotypes, discrimination and outright hatred.

We must challenge all forms of discrimination affecting Europeans.# UnionOfEquality pic.twitter.com/H7vVkKIwsb

In response to attacks by the French government, FEMYSO said it was “deeply disappointed that French government officials have spent their political capital and platforms to attack and delegitimize our fully-run pan-European youth and student organization. by volunteers, instead of trying to adopt effective policies to help local communities recover from this devastating pandemic. “

Earlier this month, the Council of Europe, a pan-European human rights body separate from the EU, withdrew from a campaign to draw attention to anti-hijab discrimination after that France has called it “deeply shocking. “

French Secretary of State for Youth Sarah El Hairy described the positive hijab campaign as “contrary to the values â€‹â€‹that France defends … France has clearly expressed its very strong disapproval of the campaign, which is why it was withdrawn “.

FEMYSO, which had cooperated with the Council of Europe in this campaign, attacked France’s “hypocritical” position and denounced its “double standards in human rights by promoting freedom only for certain people. and especially not for Muslim communities “.

France’s latest attacks on FEMYSO should not be “seen in a vacuum,” said organization president Hande Taner.

“With the upcoming elections in France, we see this unwarranted attack as nothing more than a method to legitimize the right-wing credentials of these individuals in order to appease far-right racist ideologues who intend to divide our societies “Taner said.

“The targeting of FEMYSO is nothing less than an active contribution to the shrinking of civic space as well as an attack on human rights defenders,” the statement added.

Earlier this year, the right-wing French Interior Minister Gerald Darmanin announced on Twitter that he opposed a Muslim publishing house for allegedly selling books promoting Islamic history on key Muslim figures who fought in the name of the faith.

In December 2020, the right-wing French Minister of the Interior Gerald Darmanin dissolved the Collectif contre l’islamophobie en France (CCIF) on the grounds that its work, combating widespread Islamophobia in the country, posed a threat to the State.

Earlier this year, the Macron government pressured the Muslim community to adopt a so-called ‘Charter of Imams’.

In Article 9, the charter states that â€œdenouncing alleged state racismâ€ will be considered an act of â€œdefamationâ€. The document went so far as to say that talking about state racism “exacerbates both anti-Muslim hatred and anti-France hatred.”

The document also seeks to prohibit mosques from engaging in “political speeches on foreign conflicts.”

Discussions about political injustices in the world, humanitarian crises in Palestine or Mali, places where France finds itself in an unflattering position, could be called extremism, or worse, separatism. In addition, speeches in mosques “hostile to French foreign policy” will also be prohibited.