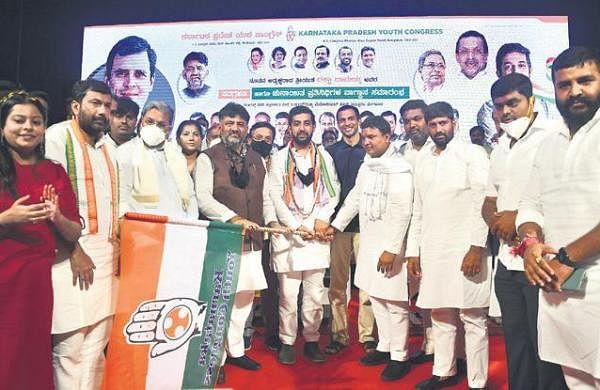 BENGALURU: After months of confusion, dozens of meetings to make sure all leaders agree and a compromise formula, Raksha Ramaiah officially took office as president of the Karnataka Youth Congress on Friday.

Karnataka Pradesh Congress Committee Chairman DK Shivakumar and Congress Legislative Party Leader Siddaramaiah chose to put aside their differences over the selection of candidates and were present at the event to congratulate Ramaiah.

The results of the Youth Congress presidential elections, which were announced in February, were marred by controversy after Mohammed Nalapad, who won more votes, was deemed disqualified, leaving room for Ramaiah to be named leader. While Siddaramaiah who had supported Ramaiah was quick to congratulate him, Shivakumar who had beaten for Nalapad refused to acknowledge the results and pushed for Nalapad’s disqualification to be challenged.

After months of deliberations and consecutive meetings with different factions of the party and its leaders, an agreement was reached to divide the mandate between Ramaiah and Nalapad. Speaking to the New Indian Express, Ramaiah said he would continue in the post until the party allows him to, and then hand it over to anyone the party deems appropriate.

â€œThe mandate is left to the party, but I have the next five months to strengthen the organization. My plan is to increase the number of existing members of the Karnataka Youth Congress from six lakh to 50 lakh. We will have five members with official positions at each booth to make sure we tackle the RSS hate factory locally and not just on social media, â€he said.

Ramaiah has been tasked with preparing ground support for the upcoming local elections as well as a network of young cadres to turn the tide in favor of the party in constituencies he lost in the last parliamentary elections. â€œWe intend to reach the young people who will vote for the first time in the next election. Our aim is to reach women voters in rural areas as well, â€he added.