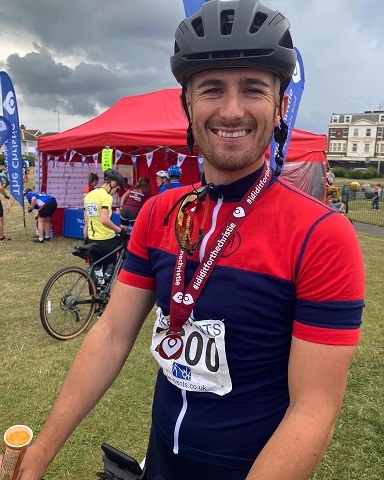 Rochdale AFC youth academy coach Jack Pritchard has become one of the first riders to sign up for the iconic Christie’s bike ride from Manchester to Blackpool in 2022.

Jack, 25, who lives in Macclesfield, is taking part in this year’s event to honor the memory of his cousin, Jo Rowley, who sadly died of cancer last year aged 36, leaving behind him her husband, Mark, son Cameron, 15, and daughter Lexi, nine.

Jo was treated at Christie’s for a rare and aggressive form of adrenal cancer, first diagnosed in early 2020.

Jack said: “So many people like Jo are affected by this terrible disease every day. I want to do everything I can. I will do this ride every year now in memory of Jo and to thank Christie for all the staff have done for her.”

“Jo was so strong throughout all of her treatments, showing incredible bravery, courage and resilience. She spoke so well of the Christie. It was his rock. Jo always felt safe and cared for by the Christie, which meant a lot to the whole family.

This will be Jack’s second time on the Manchester to Blackpool bike ride. He raised £1,750 for The Christie in 2021, just 17 days after Jo’s death.

“It was such an amazing race,” he said. “It was great to see so many people of all ages and backgrounds coming together to take on this challenge, united in the same cause, the fight against cancer.”

Jack will be joined by co-worker and football coach Lee Wilshaw for the ride in 2022.

The famous Manchester to Blackpool Bike Ride takes place on Sunday 10th July and is Christie’s biggest cycling event attended by over 6,000 cyclists each year.

It is an invigorating ride and popular with cyclists of all skill levels. The route covers 60 miles from the Imperial War Museum at Salford Quays along scenic Lancashire country lanes, then ends below the iconic Glitterball on Blackpool’s South Promenade. After completing the ride, riders can enjoy a barbecue, live music, and a well-deserved massage.

Thousands of dedicated fundraisers will rise to raise vital funds to support cancer patients at The Christie.

Christie Charity Sporting Events Manager Josh Hughff said: “The Christie Manchester to Blackpool bike ride is one of the biggest fundraising cycling events in the UK and one of our best events of the year. There is a fantastic carnival atmosphere during the day. We hope thousands more like Jack will sign up to join Team Christie and take part in this iconic race in 2022.

“Jack is a truly dedicated fundraiser, and we are so grateful that he supports the life-saving and life-changing work we fund at Christie. Thousands of supporters like Jack mean we can fund vital projects at Christie. , such as our new £150 million world-class cancer research centre, our teenage and young adult cancer research program and the refurbishment of our art room which helps patients make dealing with the emotional effects of cancer.

“But you don’t have to be a cyclist like Jack to support our work. From our weekly raffle and “cuppa for the Christie” to raising money from your employer, joining a community fundraising group, or making a donation in your will, there are many ways to helping cancer patients at Christie’s. To find out more about how you can help, including our full program of 18 sporting events, visit www.christies.org/get-involved/fundraise.

To register for the Manchester to Blackpool Bike Ride, visit www.christies.org/blackpool.