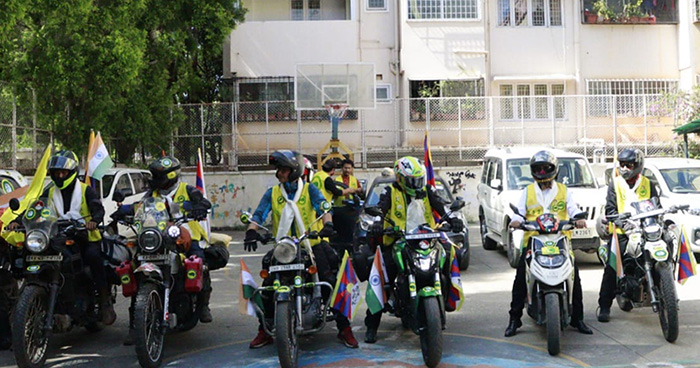 Bengaluru, India – In order to draw the attention of the international community to the gross human rights violations committed by China in Tibet and East Turkestan, and to boycott the Beijing 2022 Olympic Games, the Regional Congress of Tibetan Youth (RTYC) organized a motorcycle rally from Bengaluru to New Delhi on World Human Rights Day.

On December 10, 2021, the Regional Tibetan Youth Congress (RTYC) Samyeling Delhi organized a five-point bicycle rally from Bengaluru to the national capital, New Delhi, urging people around the world to support the Tibetan cause.

The five points of the bicycle rally were to boycott the Beijing 2022 Winter Olympics, free the 11th Panchen Lama and all political prisoners imprisoned by China, and remind people of the Chinese government’s atrocities in Tibet. They also mentioned that there had been 167 Tibetan self-immolations since 1998. While thanking India for its support, they urged people to remember 1962 (the Sino-Indian war). Tibet was an independent nation.

“We call and appeal to the basic human conscience of all peoples and boycott the Beijing 2022 Olympic Games as an expression of solidarity with the people of Tibet, East Turkestan, South Mongolia and Hong Kong who are suffering. under the repression and oppression of the Chinese government. Said an official statement from RTYC Samyeling.

They urged all international governments, non-governmental organizations, businesses and sports figures to shine the spotlight of the Games on the ongoing human rights violations by the Chinese government and to hold the host country accountable for its grave acts.

“We cannot and must not take sport away from basic moral principles. The international community cannot continue as if nothing has happened with China regarding its repression at home and its aggression abroad from the Himalayan borders. from India to Taiwan and the South China Sea, â€the statement added. .

The motorcycle rally was initiated by Sonam Tsering, TYC general secretary, Rinzin, member of the Tibetan parliament, and other Indian dignitaries. There were seven Tibetan activists on motorcycles, who will ride throughout the campaign. They carried the Tibet map flag and also carried the Tibetan flags (snow lion flag) on â€‹â€‹their bikes. 30 Tibetan student cyclists took them from Bangalore to the Dalai Lama Institute for Higher Education on their way to Kollegal.

“I urge the international community to hold China responsible for the spread of the Chinese virus and human rights violations in Tibet and other colonized countries by boycotting the Beijing 2022 Winter Olympics,” said Sonam Tsering .

“I ask my compatriots to get involved in the greater cause of Tibet and to contribute to the best of their ability to the Tibetan movement for freedom,” he added.

International events like the Olympic Games should be a celebration of human brotherhood, freedom and dignity. They should never be sold and become a platform for totalitarian and imperialist regimes to whitewash crimes against humanity.

In addition, protests have been held across the world to condemn the Chinese government’s aggression and cultural genocide of ethnic groups. Members of the Tibetan and Uyghur community have demonstrated in many countries, including Austria, France, the United Kingdom, Switzerland and Australia, organizing protests and candlelight vigils.