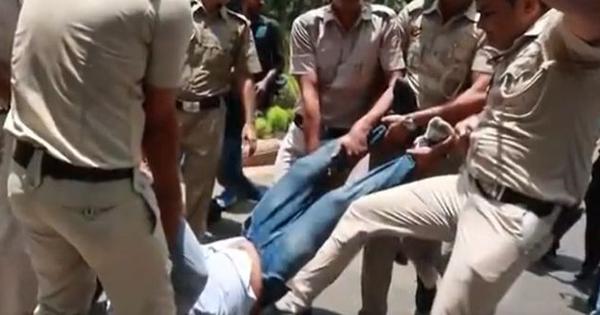 Indian Youth Congress President BV Srinivas was manhandled by Delhi police on Wednesday as he protested against the interrogation of MP Rahul Gandhi by the Directorate of Law Enforcement as part of a money laundering case related to national herald newspaper.

A video shared on social media shows Srinivas being dragged by several police officers and kicked by one of the officials on the way.

About 800 members of Congress have been detained since Monday for organizing protests, police said. Congress leaders have said Gandhi’s interrogation by the Law Enforcement Directorate for three consecutive days amounts to a “vendetta policy” by the ruling Bharatiya Janata Party.

Social media users criticized the police action against Congress leaders. Srinivas had risen to prominence for helping citizens during the brutal second wave of the coronavirus pandemic that ravaged India last year.

“The same Srinivas who fought for you against Covid-19 while Modi and his team were missing, denying reality and praising themselves,” Congress leader Salman Anees Soz wrote on Twitter while sharing the video. “The same Srinivas.”

Congress General Secretary (Organization) KC Venugopal asked if this is how the police should behave. “The BJP has really killed Indian democracy,” he added. “It doesn’t get any darker than that.”

On Wednesday, Congress leader Shashi Tharoor also shared a video of party MP Jothimani on Twitter, in which she alleged she was “brutally assaulted” by Delhi police.

The MP for Karur in Tamil Nadu told Lok Sabha Chairman Om Birla that officials tore her clothes, took off her shoes and ‘carried her like a criminal’ onto a bus with other protesters.

In the video, Jothimani said the police also refused to give them water. “When we try to buy some from outside, they tell the vendors not to give us water,” she alleged.

Additionally, the Congress alleged on Wednesday that members of the Delhi police force entered its headquarters on Akbar Road and beat up workers and party leaders.

The party has applied for the registration of a first information report against all Delhi police officers who had beaten workers without any provocation while breaking into its premises, IANS reported.

“Goondaism and the Delhi Police have reached their zenith,” Congress spokesman Randeep Singh Surjewala said at a press conference shortly after the incident. “We are protesting democratically but this goondaism will not be tolerated. It will be counted. Let all police officers who act as puppets of the Narendra Modi government in order to please their masters know that this will not go unpunished. »

Senior Congress official P Chidambaram, who suffered injuries to his left rib after being manhandled by police during Monday’s protest, said the action at headquarters was an “outrageous violation of freedom”.