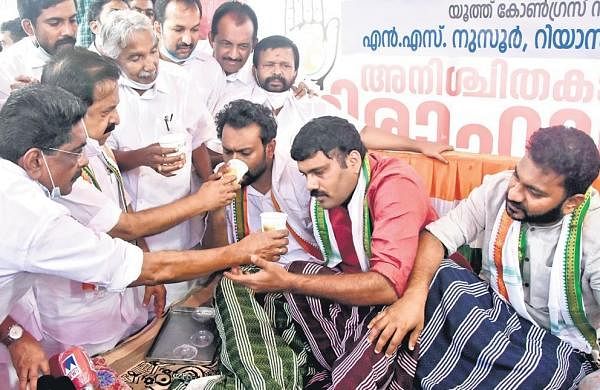 THIRUVANANTHAPURAM: Following the assurance given by Opposition Leader Ramesh Chennithala to job candidates – who are on various ranking lists of the Civil Service Commission – who were protesting outside the Secretariat, the three Vice Presidents of the State Youth Congress called off their indefinite hunger strike.
YC leaders had been protesting for a week. Chennithala regretted that Chief Minister Pinarayi Vijayan launched abuses during genuine protests.

On Sunday, the aspirants on the ranking list of senior civil servants had concluded their 34-day protest after Justice Minister AK Balan’s assurance that the LDF government would seek permission from the Election Commission of India to meet their concerns. Currently, those in various rank lists like Civilian Police Officer, All Kerala HSA (English), Level 2 KSRTC Mechanic, Forestry Depot Warden, LPS/UPS/HSS and Reserve Driver KSRTC are staging indefinite protests in front of the Secretariat.

Apart from Chennithala, KPCC Chairman Mullappally Ramachandran and former Chief Minister Oommen Chandy spoke to the representatives of the job candidates outside the YC protest venue and assured them that the UDF would prioritize their claims if she came to power.

The second stage of the YC protest was led by NS Nusoor, Rijil Makkutty and Riyas Makkutty, who have since been transferred to hospital. The first stage was led by YC State Chairman Shafi Parambil, MLA and Vice Chairman KS Sabarinadhan, MLA who were transferred to hospital after a week. Chennithala alleged that in addition to the chief minister, the DYFI also stabbed the protesters’ cause. “The protesters’ demands will be given due priority when the UDF government comes to power,” he said.