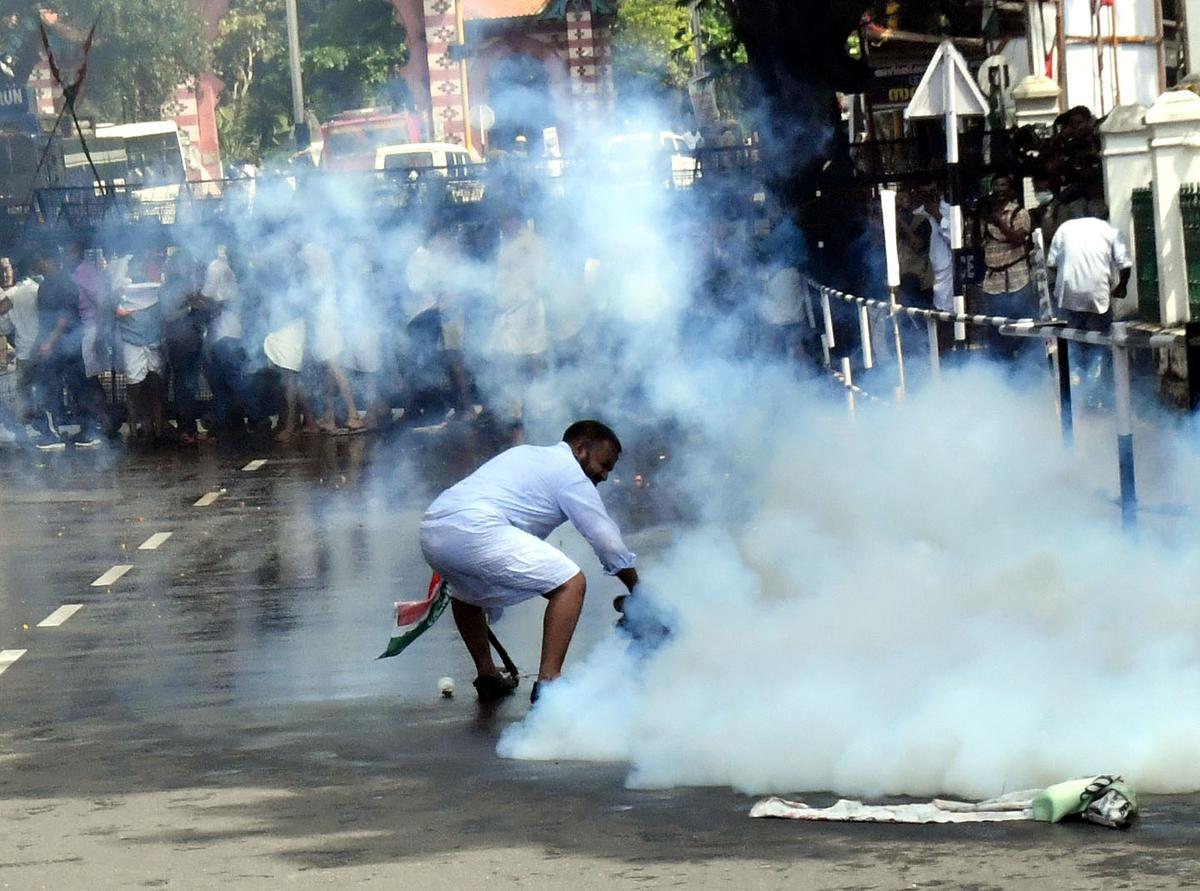 A protester attempts to cover a tear gas canister thrown by police with a burlap sack during a Youth Congress protest demanding the resignation of Mayor Arya Rajendran, in Thiruvananthapuram on Thursday. | Photo credit: S. Mahinsha

The state capital turned into a battleground on Thursday when Youth Congress activists clashed with police outside the Thiruvananthapuram City Corporation over a letter allegedly written by Mayor Arya Rajendran asking for a ‘priority list’ of candidates from the Communist Party of India (Marxist) [CPI(M)] District Secretary Anavoor Nagappan for appointment to temporary civic positions.

The headquarters of the Corporation, which has been marred by unrest undertaken by the Bharatiya Janata Party (BJP) and the Congress for more than a week, has fallen in the grip of the violent protest which has spread to nearby areas. and lasted approximately two hours, during which a section of MG Road was closed to traffic.

The Youth Congress, which demanded Mrs. Rajendran’s resignation, began its march to the Corporation’s office from the Martyrs’ Column in Palayam at around 12.30 p.m. Shortly after its inauguration outside the compound of the Corporation, several militants tried to overthrow the barricades erected in front of the main building. gate.

The large police detachment stationed in the area used a water cannon more than five times to quell the protest. However, the activists regrouped each time and threw rocks and flagpoles at the police personnel. The situation threatening to degenerate, the police fired several smoke grenades and tear gas shells in the direction of the demonstrators.

The agitators finally dispersed after the police beat them. The clash spread to the LMS junction and nearby locations. Police managed to avert a potential clash between Youth Congress activists and the Student Federation of India (SFI) when a group allegedly belonging to the latter threw stones at the former near the premises of the university hostel. A policeman and a driver from a television station were injured by stone throwing.

Opening the protest earlier, State Youth Congress Chairman Shafi Parambil accused the CPI(M)-led government of facilitating the disguised nominations. He added that the organization would hold protests across the state until the mayor resigns.