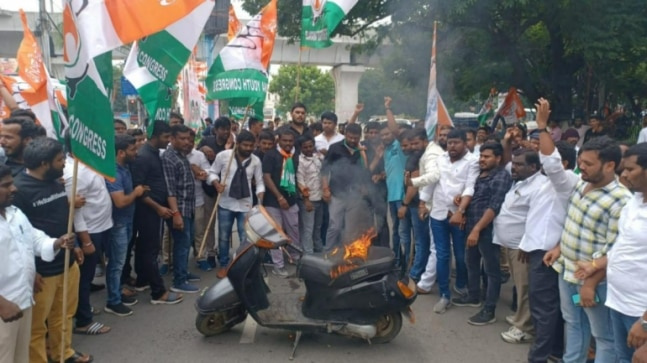 In Bangalore, party workers set fire to a car outside the ED office in Shanti Nagar in protest against the central agency. DCP R Srinivas Gowda said police were trying to verify the registration number of the vehicle.

“We are trying to verify if it was a scrap vehicle or if it belonged to someone. The registration number has been taken and is being verified. 11 people have been arrested. We are verifying what organization they belong to and if it is their own car,” he said.

Congress leaders and workers led by former chief minister Siddaramaiah and state chairman DK Shivakumar also staged a rally from the party office on Queen’s Road which ended in a town hall meeting at Freedom Park. .

Meanwhile, a Youth Congress worker was caught with a kerosene bottle near a car in Seshadripuram. The police towed the vehicle. As the interrogation continued, Youth Congress workers in Hyderabad vandalized a two-wheeler just outside the State Assembly, nearly 100 meters from the ED regional office. In Odisha’s Bhubaneswar, NSUI and Youth Congress workers staged a protest march to the ED office led by State Congress Leader Sarat Pattnaik, MP Tara Prasad Bahinipati and others. More than hundreds of activists gathered with posters and banners, brandishing slogans against the BJP’s “vendetta politics”. They were arrested near Raj Mahal Square following which a scuffle broke out. Sonia Gandhi arrived at ED headquarters on Thursday escorted by her Z+ category CRPF security blanket. The interrogation began around 12:30 p.m. after the completion of certain formalities such as the verification of the summonses and the signing of the attendance sheet.

The Delhi police had deployed a huge force, including CRPF and RAF personnel, and barricaded the entire stretch of more than a kilometer between Sonia Gandhi’s residence and the emergency office.

The ED recorded Sonia Gandhi’s statement for two hours and ended the day’s session at her request as she recovers from Covid.